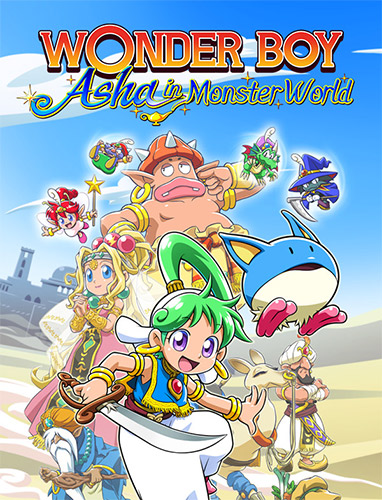 Game Description
The adventures of Asha and Pepelogoo begin!

Asha, the warrior protagonist of the game, is involved in a serious incident that will affect the survival of her world. Our green-haired heroine doesn’t have to save the world all alone, and sets off on an adventure with her cute flying friend, the blue Pepelogoo. Asha and the Pepelogoo have to work together to become the heroes the world needs them to be. The road ahead is long – but will they be able to save their world?

A full remake of “Monster World IV,” the action RPG masterpiece released in the 90’s, by the staff of the time!

This time the devs bring to you – “Wonder Boy: Asha in Monster World” with new visuals and sound adjustments.

Staying true to the series legacy

For Wonder Boy – Asha in Monster World, the original staff from the former Westone Bit Entertainment gathered together to create a game that stays true to the spirit of the original games. The team is led, and directed, by the creator of the Wonder Boy series, Ryuichi Nishizawa and supported by Shinichi Sakamoto (sound), Maki Ōzora (character design) and Takanori Kurihara (creative management). You can’t get more Wonder Boy than that