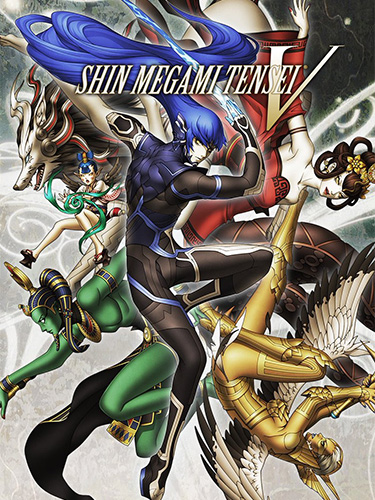 Game Description
Godhood awaits
Forge the destiny of a dying world amidst a power struggle between gods and demons in Shin Megami Tensei V on Nintendo Switch. In this expansive RPG, take control of an enormously powerful being, the Nahobino, to battle against – and alongside – hundreds of demons in a desecrated land.

Neither human, nor demon, the newly-forged Nahobino and his friends must decide what is worth saving…and prepare to sacrifice everything in its name.

Discover a demonic world
As an ordinary high school student, you find yourself transported to a crumbling realm littered by the remnants of what was once Tokyo. Savaged by war, this netherworld known as Da’at hides many secrets among its ruins – and danger in every corner.

Set upon by demons in this deserted wasteland, your only path to survival is to take the hand of a mysterious figure named Aogami. In fusing together, you become the Nahobino, an accursed being with the ability to battle or befriend demons.

Harness your newfound power
What good is power if you do not use it? The numerous demons that inhabit Da’at will put up challenges wherever you go. Put your new talents to the test and take the fight to all manner of demons in turn-based battles. Up to three recruited demons can fight by your side in each battle, so always be on the lookout for allies that can broaden your offensive options.

Many demons have weaknesses, but they won’t reveal them willingly. Launch a variety of attacks until their vulnerabilities are revealed. Each successful strike against a weak point will do great damage, and grant you additional consecutive turns to continue the assault uninterrupted.

Gather special energy Magatsuhi with every turn, and use it to unleash powerful moves that can cause critical damage to foes, or otherwise support your party.

With this new strength, find out what happened to Tokyo, and decide the fate of the world.